This painting by Burkhart may be the earliest example of his work. Painted in 1918 at the age of 13, Burkhart gave this painting to his cousin. He had no formal training yet one can see the potential the young man had at an early age. 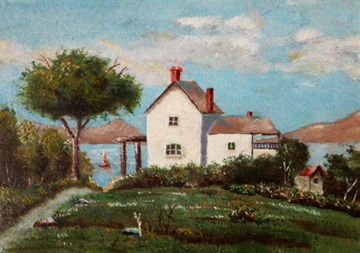 For more information, e-mail us at services@emersonburkhart.com. and include good quality
digital photographs of the front and back of the art. We will respond with a written estimate of the cost
to  complete your appraisal.​

Our fine art restoration services are second to none. From simple cleaning to complex relining, inpainting, and canvas repair or replacement, we can provide the results you are looking for. Our restorer has managed complex restoration projects for governments, museums and individual collectors.

If you are interested in learning more about our restoration services, simply e-mail us at services@emersonburkhart.com. with a description of your art, dimensions, media and include quality digital photographs of the front and back of the piece as a file attachment. Please include close up photographs of any areas with special condition issues.

We will respond quickly with a written estimate of cost and time needed to complete any cleaning or restoration. Please note our restoration facility is well insured to protect your work and provide peace of mind while your art is in our hands.

Now is the Time to Buy

Interest and excitement continues to build around Burkhart. Much of this is driven by the recent release of the book, ‘Emerson Burkhart, A Painter’s Song of Himself’, by Michael Hall. This is the first authoritative treatment on Burkhart since his death in 1969. If you have been considering the purchase of a painting or watercolor by Burkhart, now is the time to do so. Now that the book has been released, it is likely that growing interest in ‘American Scene’ art and artists in general, and Burkhart in particular, may well lead to increased prices for his work.

Emerson Burkhart was born near Kalida, Ohio in 1905.  He graduated from Ohio Wesleyan University in 1927, studied at the Art Student's League in New York City and subsequently travelled to Provincetown, Massachusetts where he took instruction from Charles Hawthorne. In 1931 he returned to the Midwest and taught at the Columbus, Ohio School of Art.  He was an early member of the Ohio Art League.

Burkhart was primarily an American Scene painter, although he painted in impressionist, post-impressionist and realist styles at different points in his career.  Among his many subjects, he documented African-American life in Columbus that recalls the canvases of Ivan Le Lorraine Albright.  Additionally, he created paintings depicting his disdain for wretched excess and our evolution to a disposable society. Burkhart is also well known for his street scenes

He received two WPA mural commissions, one at Stillman Hall on the campus of Ohio State University, and the now infamous mural painted above the auditorium of Central High School in Columbus, Ohio. Just several years after the mural's completion, the school principal had the mural whitewashed as it was too 'risqué' and inappropriate for young minds. It was only sixty-five years later that the mural was restored and given a new home at the Columbus Convention Center.

His wife, Mary Ann, was a model who posed for Edward Hopper and Eugene Speicher among others. After the premature death of his wife in 1955, Burkhart traveled as Artist-in-Residence for the International School of America, founded by one of his patrons, Karl Jaeger.

Burkhart continued to paint prolifically throughout the 1960's until he suffered a stroke and passed away in November 1969 at his home in Columbus, Ohio.

To learn more about Burkhart, you can enter his name into any of the major search engines and browse a variety of web sites devoted to his work and life. The first definitive biography on Burkhart, 'An Ohio Painter's Song of Himself' by Michael Hall, will be released on October 31, 2009. It is available through most book sellers on

of the period, you may submit them for consideration by

contacting Geoff Hetrick at 614-329-5543.
If you have interest in a particular piece, please contact

Geoff Hetrick at 614-329-5543 and we can provide additional information as needed.

​​Appraisal and Fine Art Restoration Services
​We are also pleased to provide expert consultation regarding the value of your art. Whether you need a written appraisal for insurance purposes or to ascertain fair market value, we can help. Our appraiser has more than two decades experience with fine art and has consulted with museums, galleries, major universities and numerous private collectors. 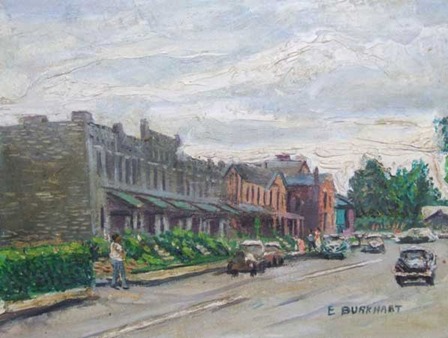 Original Art for Sale by Emerson Burkhart and Other Selected Artists

EmersonBurkhart.com was established to provide a web-based marketplace solution for collectors buying and selling original works by this renowned American Scene artist and other quality works of art. The pieces offered for sale on this site are not brokered by dealers, rather by individuals, thus reducing the need for expensive commissions. On approval, the cost to consign is $50 for up to six months. Commissions are 15% of the selling price if paying by check or 18% if by PayPal due at the time of sale. Any art for sale must be delivered to us prior to listing in order to fulfill timely delivery to purchasers.