​
During Burkhart’s first trip overseas with the ISA in 1959, he found two subjects in Bangkok who agreed to pose for him.  One portrait was of a woman with child, a powerful painting that was included in the Burkhart Retrospective Exhibition at the Columbus Gallery of Fine Arts in 1970.  The other is this work, and it may be the husband of the aforementioned woman with child.

This small gem is representative of Burkhart's ability to render figures with a minimum of paint and knife strokes. Burkhart is best known for his figurative street scenes. Excellent condition. 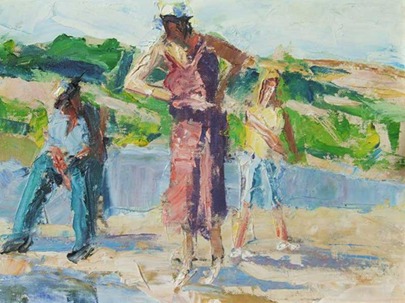 Welcome to the gallery pages at EmersonBurkhart.info. To view available works for sale, click on the gallery button at the top of the page, then follow to the Burkhart galleries. Scroll down the page to see the full inventory in each gallery.

Burkhart painted a variety of dwellings from tenement housing, wood frame homes and store fronts among other subjects of this genre. The consignor has said this particular work was painted at a local university but we cannot positively identify the building or location. The style depicted in this work suggests it was painted during the late 1940’s or early 1950’s.  It is in excellent condition. 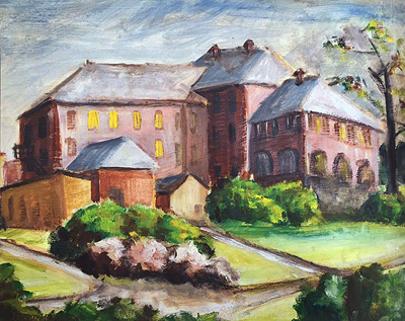 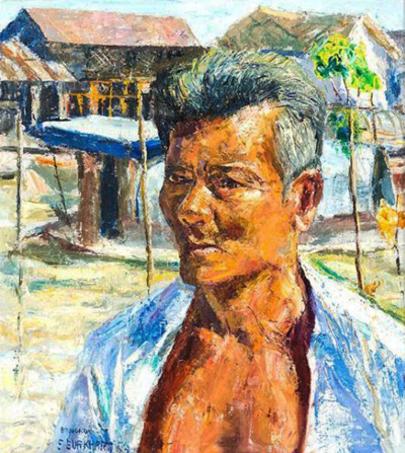 NO LONGER AVAILABLE
​
As many know, Burkhart was his favorite model because , “I am always here and always cheap!”  He depicted himself in as many as 400 paintings over the course of his career as an artist. This is a nice example of a work that he thought enough of at the time to actually title, “Relativity.”  The colors are vibrant and the fact that it was loosely painted anticipates his style most prevalent in the late 1950’s and ‘60’s.  It is in excellent condition and ready to hang. 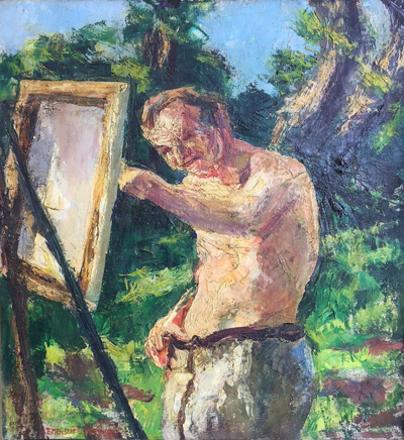 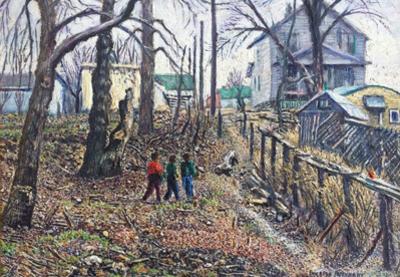 Emerson Burkhart -  ‘Three Children Street Scene’
10 x 14, oil on board, signed lr, “Emerson Burkhart’.  Circa early 1950’s  Excellent condition
NO LONGER AVAILABLE
​ ​
We have seen many well executed street scenes by Burkhart but this one is a gem and was also painted during the period when he was producing some of his most important work.  The detail he chose to depict in this scene is amazing.  This is clearly one of the hardscrabble neighborhoods in Columbus.  The emerging greens used in the foreground suggest this is a late winter, early spring scene.  This is a great opportunity to own a superb smaller street scene at a very reasonable price.

For purchase information please click on the 'buy' button at the top of the page. 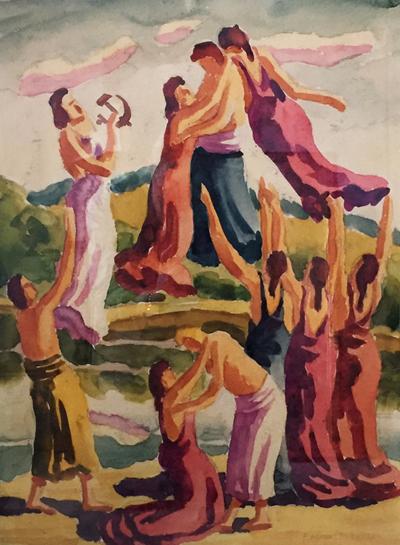 ​Like other artists of The Great Depression, Burkhart was always working to land WPA mural commissions.  Throughout this process, he would experiment with a variety of themes.  This work was likely painted in the mid 1930’s, and may be tied to the large mural that once covered the proscenium of the stage at Central High School in Columbus.  Burkhart toyed with the notion of ascension after death and for reasons unknown, included the Communist symbol of the hammer and sickle within this study.  It may have been a witty way for him to express his agnostic point of view in a work of art.  As a practical matter, there was certainly no way the WPA would have supported this concept in any commission under their control.  It is a rare work and highly desirable.  ​