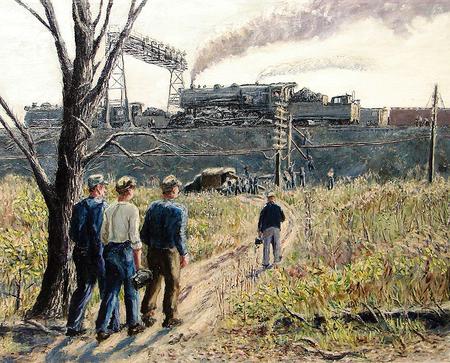 “After completing our Woodland Park film project, a neighborhood where Burkhart lived, we felt there was so much content and interest around him that the next logical step was for us to produce a full one-hour documentary on his life,“ said Spears.  “Our goal is to place the completed documentary on television.”

Scott Spears and Christina Paolucci have announced they plan to begin work in early 2016 on a one-hour documentary featuring the life of Emerson Burkhart, noted Regionalist and American Scene artist who lived in Central Ohio for most of his life.  Burkhart was a fixture in Mid-Century art circles in Columbus and had a great following among artists and the public alike.

​
Paolucci added that, “In order to cover the cost of production, we have set up a ‘Power to Give’ page that allows contributors to invest at various levels and receive some truly great benefits beyond the ability to deduct this expense as a charitable donation.  Our goal is to raise $17,000 in private contributions.  Chase Bank is matching every donation at fifty cents for each dollar over the next two months.  Once raised, additional funding will be available through several Central Ohio arts and humanities donors.  I urge potential donors to visit the link at, https://www.power2give.org/campaigns/75 to learn more about this great project.”

​Please consider these benefits when making a decision on whether to contribute:

• It will shine a light on a revered local artist.

• Your donation is tax-deductible.

• All donors will be acknowledged in the film and website credits.

• You will be kept up to date on the film's progress through an e-newsletter and other social media platforms. 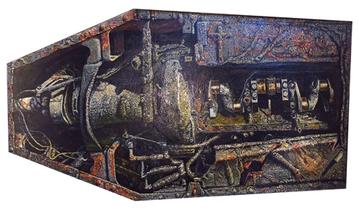 (August 17, 2015 - Gahanna OH)  Griffin Gallery at Creekside is pleased to announce an exhibition of paintings by Columbus artist Emerson Burkhart (American 1905-1969) from October 2nd to October 31st, 2015.  This special exhibition titled, “Emerson Burkhart – Reflections of His World – Columbus and Beyond,” will be held at the gallery located at 77 Mill Street, in Gahanna, Ohio.


​
The gallery is collaborating with Burkhart historian, Geoff Hetrick, who is curating the works to be included in the exhibition.  Visitors can expect to see nearly forty paintings as well as personal items that belonged to the artist.  A number of the works will be available for sale.  Two of his best paintings, “The Light is Greater Hence the Shadows More,” (first version), as well as “And We Love Our Luxuries” will be included in the exhibition.

Burkhart was well known around Columbus and pursued his passion of capturing Central Ohio life as he saw it.  He is best known for his depiction of Columbus area street scenes, self-portraits, country landscapes, several important portraits of African-Americans and paintings he produced while serving as artist-in-residence on global educational trips with the International School of America.

“I am excited to bring a wonderful collection of Burkhart paintings to Griffin Gallery at Creekside.  Many of the works have not been exhibited previously and come from collections here in Central Ohio, across the country and from an owner in Europe.  The gallery and I are committed to helping the public understand that much of the art produced by Burkhart was of equal quality to works created by other important regionalist painters of the ‘30’s, 40’s, and ‘50’s such as Ivan Albright, Thomas Hart Benton, Clyde Singer and others.”

Hetrick will be speaking at the opening reception to be held on Friday, October 2nd from 6:00 PM to 8:30 PM.   The public is invited to attend.

Author Michael Hall joins Karena Jaeger, daughter of Burkhart patron Karl Jaeger, for a quick photo December 12th,2009 at the Columbus Museum of Art. Hall took time out from signing copies of his book, ‘Emerson Burkhart, An Ohio Painters’ Song of Himself’, for this photo.​ 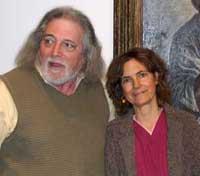 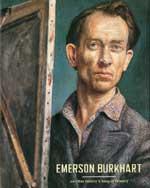 Workers found buried treasure when they yanked down drywall during a renovation of a University of Rhode Island building in July. Behind the plaster were six murals painted 71 years ago by Gino Conti — works that art historians had thought were lost. 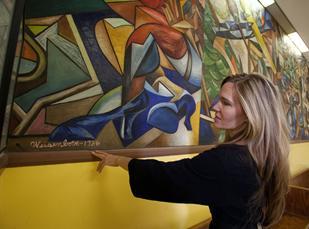 A Painter's Song of Himself

On Saturday December 12, 2009, The Columbus Museum of Art hosted a lecture by Michael Hall, author of the book, 'Emerson Burkhart – A Painter's Song of Himself'. Approximately fifty guests attended the session. Hall spoke on a variety of topics about the recently released book including his thoughts on why Burkhart is now gaining traction in the discussion of American Scene art.

It is Hall's contention that there is an academic alternative to viewing art history through the lens of the most important practitioners through the ages. He contends that a number of excellent artists have worked on the fringes of fame and recognition throughout time. Their stories and work demand attention in order to fully understand what the total contributions to a movement or school mean in the larger discussion of art history. In Hall's opinion, Burkhart is a classic example of such an artist.

Hall also encouraged those in the room, many of whom knew Burkhart personally, to share their own stories and connections with the artist. After the lecture, Hall signed copies of the book for those in attendance.

Now Available to the Public  January, 2012

Highly prized Burkhart paintings from the estate of Charles Weaver, Savannah, Georgia are now available exclusively through emersonburkhart.info. This collection was acquired directly from the artist by Mr. Weaver and was the cornerstone of his collection for more than 50 years. Weaver was a neighbor of Burkhart and the two were good friends. Additionally, Weaver was a part time artist and often painted side by side with Burkhart. Weaver had an ‘eye for quality’ and systematically purchased the best Burkhart paintings he could afford. His discriminating taste led him to build what is arguably one of the best private collections of Burkhart paintings anywhere. The paintings offered here represent outstanding examples of Burkhart's work from the 1940’s through the '50's. These two decades represent the timeframe when scholars agree Burkhart was at his best. Nearly all of these paintings have exhibition provenance.

We are pleased to be able to offer such an exceptional collection to the fine art market. This is a rare opportunity to own a Burkhart work of outstanding quality. These paintings are being offered at very competitive prices; however, we also invite legitimate offers. Please do not hesitate to contact us if you have questions.